Sky-blue gas? Heavy metal? There’s more than one way to sanitise a pool or spa

Ozone is a sky-blue gas formed naturally by the action of the sun’s ultraviolet rays or when a large electrical discharge, like  lightning, passes through oxygen. It is a relatively unstable, highly toxic gas which decomposes to re-form oxygen and is very effective against bacteria.

Used for many years in the USA and Europe, ozone is the standard purifier in both water bottling plants and in pools approved by the Olympic Federation.

One of the most effective disinfectants and oxidisers, ozone starts killing bacteria and oxidising organic waste as soon as it is injected into the circulation stream.

TOXIC TO MORE THAN BACTERIA

All traces of ozone must be consumed or removed prior to it reaching the pool, so small amounts of residual sanitiser like chlorine or bromine must be used to provide continuous protection within the pool.

If using ozone with chlorine, follow the manufacturer’s recommendations on maintaining pH. If using it with bromine, the oxidising power of ozone will regenerate the inactive bromine, reducing the consumption of bromine product.

Due to its instability, ozone remains in the water for only a short time and has no effect on pH or water balance. Nor does it contribute to Total Dissolved Solids. It can even reduce the need for shock dosing.

Recent developments in technology have enabled manufacturers to produce smaller, more economical ozone generators more suited to domestic pools and spas. These units produce the gas in two ways. Passing air over an ultra violet light source or through a Corona Discharge chamber will generate ozone.

The gas concentration produced in both systems can vary, so follow the manufacturer’s recommendations and select the unit most suited to your pool or spa.

Today, an ion-generating device can be installed in the circulation system. It’s made up of an electrode assembly (a copper electrode and a silver electrode) and the electronic control unit that supplies an electric current to the electrodes. Electrolysis then passes either silver or copper ions into the water where the silver disinfects and the copper prevents algae growth.

Electrolysis of metals does purify but it does not chemically balance the water. See SPASA Victoria Fact Sheet 5 to correctly balance the water. Silver and copper residual levels can be measured, however the registration authorities require maintaining a chlorine or chlorine-free disinfectant residual as well.

The metal ions kill algae and bacteria but they do not oxidise organic waste. It is therefore necessary to ‘shock treat’ or ‘super chlorinate’ the pool to oxidise any build up of organic waste and maintain disinfecting action.

Note that dissolved metals may stain a pool or spa, or discolour the water. Always keep the copper and silver residual levels within the manufactuer’s recommendations. 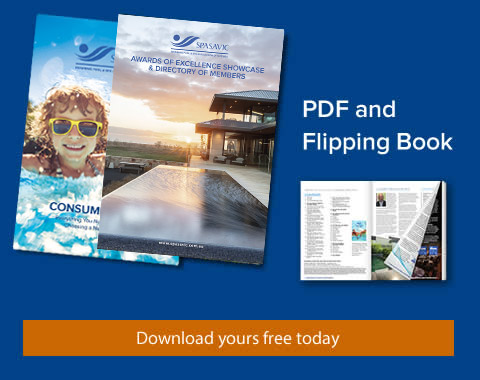